Black Americans“Buchser’s Negro paintings are progressive. He seems to have been impressed at first with the grotesque or the merely picturesque in Negro character, but he was not slow to penetrate to the poetical, and to do justice to the sympathetic levity that Slavery super-induced upon cheerfulness. But his latest advance is the most important. He has discerned the ambition, the hope and the aspiration that mark the great transition which the Negro race in this country is now undergoing – a transition, perhaps, the most rapid, gigantic, and beneficent which the history possesses the genius to become the historian upon canvas of this grand process (…) there is here one of the most fruitful fields which art has ever attempted to cultivate.”

Buchser could not lure everybody to the point he wanted – not everybody likes to plunge into a satisfying subject matter. Some people reminded distant and questioned the truth of Buchser’s scenes, and the artist himself was struck by the fact that the overwhelming majority of American citizens were not spontaneously sympathetic with the motif of black Americans. Their different political background led to a different approach. During Reconstruction white Americans assumed that a political agenda dictated Buchser’s choice of this subject matter. Even when they could not find a clear message, they suspicions lingered.

The Swiss artist expected that the ruling class in the former Union states would identify with the destiny of the liberated slaves after having fought a bloody civil war for their freedom. But he found not such empathy. Rather, he noticed with a certain indignation that blacks did not have full citizenship. But a certain kind of identification is necessary for Buchser’s scenes of everyday life to achieve their full effect. A large part of the North American art public resisted active participation in the creating of meaning.

Art critics who reviewed exhibitions of Buchser’s work in New York and Washington called the artist a foreigner and a European. For American writers this was the only explanation for the fact that the artist supposedly longed to participate in the life of the Other, that he seemed able to identify with the existence of Native and African Americans. Only for Europeans were the lives of these people totally unfamiliar and therefore impregnated with the promise of a richer existence. Such Kolportage, or transference, allows the beholder to envision a better world on the condition that he gives up his distance and doubt, thereby helping the viewer escape the sorrows or the boredom of his everyday life. Thus this art form depends strongly on the experiences each beholder has had during his life. 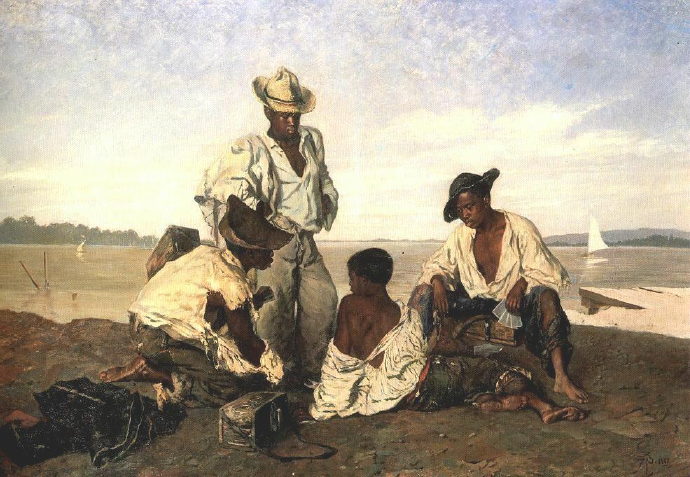 “But his Negroes attract the visitor more than anything else; he has caught to the very life the spirit and character, the dress and carriage of these people, and portrays them in no spirit of ridicule, but with the most genuine sympathy and comprehension of them.”

Ruggedly dressed bootblacks amuse themselves, although here the game is marbles rather than cards. Interesting to note is the graffito behind the playing boys: a stick figure labeled “John Brown”. This reference may serve as a somewhat humorous addition to the picturesque genre scene or may suggest a nascent political awareness on the part of recently emancipated African-American youths.