Montage of Jupiter and its Four
Largest Moons

Here is a montage that shows Jupiter’s Great Red Spot, along with Jupiter’s four largest moons. From top, they are Io, Europa, Ganymede and Callisto. These pictures were taken using the Galileo spacecraft that was launched in 1989. As you scroll down, you will see photographs of the Great Red Spot and more detailed pictures and discussion of the aforementioned moons.

Io is the most volcanically active world in our solar system. In fact, in this photo of Io, a blue volcanic plume can be seen at the very left side of the picture.

If you click on the picture, you can read a BBC article that describes some of the unusual activity to be found on Io. This will open a new browser window. When you are finished reading the article, just close the window. 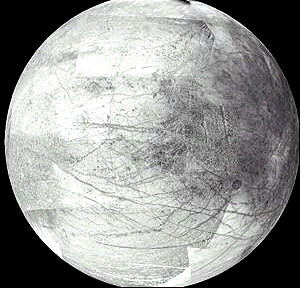 This mosaic provides the best view ever obtained of the side of Jupiter’s moon Europa that faces the giant planet. If you click on the image, you will be able to read a BBC article that describes Europa in more detail. This will open a new browser window. A liquid ocean may lie beneath Europa’s icy surface. Thus, some scientists theorize that there might be primitive life on Europa.

In this picture of Ganymede, polar caps can be seen at the top and bottom. Some cratering can also be seen, but this view  has most of Ganymede in darkness. The regions that appear in violet are thought to correspond to frost particles.

This string of craters on Ganymede may have been caused by a comet that broke up into separate fragments just as it was about to hit the surface.

Callisto is considered the most cratered celestial body in the solar system. The false-color overlay at right exaggerates the moon’s surface features, including the Valhalla impact structure near the center of the disk.